The Left Bank: A Tradition Unlike Any Other 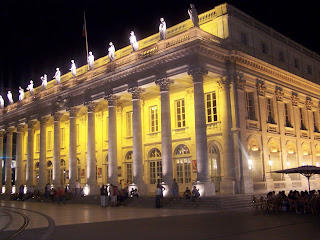 In my previous post I briefly explained the two main wine growing regions in Bordeaux, the right and the left bank. In today’s, I’ll dive into the left bank. I realize this may get a bit long and even *gasp* informative. However I assure you that my hijinks will ensue later this week. Bare with me. Or leave and check this LINK out instead (preferably both).

I think that, going forward, it’s important to remember that the left bank thinks itself vastly superior to the right bank. And, for the most part, the wine community agrees. Since the left bank uses Cabernet Sauvignon to make up the majority of their wine, there’s a bit of a superiority complex (regardless of whether it’s deserved or not). Along with that superiority complex comes outrageous pricing, a little bit of an attitude, and palpable snobbery. In addition to the species of grape they use, the left bank also has an abundance of ‘alluvial gravels’ in the terroir (a fancy french word for soil). Basically the left bank vineyards lie on dried up river bed; and though it’s a bit ugly aesthetically, it’s terrific for producing wine. The reason is that they reflect sunlight onto the bottom of the berries; heating them up, ripening them more, and ripening them faster than they would otherwise.

The left bank is separated into eight major appellations; with three being somewhat less prestigious and the other five being more exclusive. Here’s a map of all of Bordeaux. The most important wine making regions are St. Julien, St. Estephe, Margaux, Pauillac, and Pessac-Leognan. If you see any of those on the label of your wine, it should be some quality juice. The other three, larger regions are Medoc, Haut-Medoc, and Graves.

When discussing and even thinking about Bordeaux, you always have to keep in mind the classification system. The most basic classification is run by a government operated. You have to follow strict guidelines in order to even put ‘Vin de Bordeaux’ on your wine. These include no irrigation, no tampering with soil (such as importing the oh-so-valuable gravels), and even no planting of Chardonnay grapes (as silly as that sounds). As an aside, this creates an interesting dichotomy in the French psyche. They think and assume their wine is better than any new world wines, but equally envy and detest that the new world can do whatever they want to the soil and grapes.

The left and right banks have different classification systems. More specifically all the premier (no pun intended) wines on the left bank were classified in 1855, and there has been minimal change since then but for the infamous ‘moving up’ from second to first growth of Mouton Rothschild in 1973. That is an amazing story for another time. Read here for a much more in depth description of the classification. But basically the royalty of Bordeaux lines up like this, in no particular order: Cheval Blanc, Ausone, Margaux, Mouton Rothschild, Latour, and Haut Brion, with Petrus as the queen and Lafite Rothschild as king.

Now why would anyone care about the novel I just wrote? Hopefully this basic education can help someone, anyone understand just a little about Bordeaux wine. And hopefully it will inspire them to try the progenitors of those humongous California wines. Without further ado, a small little tasting profile of four ‘reasonably’ priced left bank wines. All under $100, one under $30, one under $50, one under $75 and one clocking in at $89.67. So hopefully a wide spectrum of things to try, regardless of your price range. We’ll start with the cheapest and move our way up.

This is a traditional Bordeaux blend consisting of Cabernet Sauvignon and Franc, and Merlot. The amounts of each grape vary from year to year. The color of the wine was opaque blood ruby; deep red. In the glass, the nose was a little hot and alcoholic, though not entirely unexpected considering its youth and vintage. there are hints of cherry pie and smokey incense, traditional Lafite Rothschild scents and remnants, no doubt, of its big brother. The most prevalent scent appeared after about an hour of being open. The unmistakable notes of Autumn spices (cinnamon and cloves were most noticeable) came through. In the mouth, the wine was a bit unremarkable. Relatively tart with a hot aftertaste and an unenjoyable finish.
The wine has little complexity, though that should not discourage you from trying it, as the nose is very tasty. You can definitely see the pedigree of the wine, though it is dealing with playing 2nd or even 3rd fiddle to the more prestigious labels of its house, in addition to being young and from an average vintage. To be honest, it is better than many California Cabs in the same price range.
88 points, a solid wine worth tasting.
2004 Haut-Bailly Pessac-Leognan, Grand Cru Classe–$49.33 retail
Haut Bailly is often overlooked as its cousins within the appellation are the much adored Haut Brion and La Mission Haut Brion, however this under the radar wine consistently preforms superbly, especially in mediocre vintages. While I wouldn’t say 2004 was a mediocre vintage, it certainly wasn’t a premier one. That being said, the 2004 Haut Bailly is a tremendous wine. I opened the wine, let it breathe for 30 minutes and tasted it incrementally for the next 3 hours.
Out of the bottle its a translucent deep purple with a red edge.  The nose is remarkable in its simplicity. At first a bit underwhelming but much more revealing upon further analysis and aeration. The first scent that hits you is fresh, crisp red delicious apples. It follows that up with dried apricots and, ironically enough, musty grapes. It also has hints of citron vodka, soy sauce, sweet cream, and coffee beans. In the mouth the wine is just silky and elegant (cliche I know). The wine is not overly tannic for a baby, although you can definitely tell this wine will age well. When it was first opened the wine was very closed and had traces of pine needles. However the most prevalent flavor is baked cinnamon apples. Soft and sweet.
This is a tremendous wine, especially when taking into account the price. The win
e needs to be decanted for at least an hour and a half, however it is drinking beautifully now but it can be aged, I think, for another 10 years.


Ducru is consistently one of my favorite wines. I’ve had it in good vintages and bad, and almost invariably it is good. Especially when you take its price into account, the wine is a steal. 2006 is an interesting vintage. It gets a bad rap, possibly because it has to follow the epic 2005 or possibly not. Either way, I find that the vintage is underrated. I let the Ducru breathe for about an hour and tasted it over the next 3.


The color was very very dark. An opaque purpley black. The nose on the wine is staggering. There is a strong sense of sweet plums and honeydew. The back end shows hints of strawberry bon bons. Yeah, the old school candies. This is one of the most enjoyable noses I have tasted in a while, and certainly from such a young wine. Really the most outstanding part of it. The wine in the mouth is markedly complex. The tannins are strong but not overwhelming. They did soften up a bit with aeration though. The wine has unexpected sweetness for a Bordeaux; and flavors of pavlova and toast with jam and butter are prevalent. The wine comes off a bit hot, but I suspect that’s a factor of its youth. Unlike a lot of other left bank wines, the Ducru doesn’t seem to be loafing around; it’s jubilant and excited. It seems like it doesn’t take itself too seriously and it has a sense of humor. It finishes quietly and softly…like a whisper. The wine can be drunk now, but you’ll be better served waiting 10 to 15 years; it’ll be an all-timer by then. Still enjoyable now though.

Pontet-Canet is an oft overlooked winery, but they are, in my opinion, one of the most underrated Paulliac wines. In addition, Pontet-Canet is one of the only Bordeaux wines that is bio-dynamically operated. A rare forward thinking French chateau coupled with a chief and terrific terroir makes this one of the fastest rising labels in France. I decanted the bottle for and hour and a half before tasting my first full glass; I then tasted it over the next 2 of hours.

Like most other high end 2006’s, the Pontet-Canet is deep purple, almost black. The nose is just so sexy and appetizing. There’s Tahitian vanilla beans throughout, with salty caramel and licorice extending through wine. There are light hints of creme de cassis and grape flavored popsicles. In the mouth, the wine is very creamy. It feels like it has volume and weight. The most prevalent flavor is that of seeded grapes. The body and finish reminds me of sweet strawberries in clotted cream. The wine needs to be decanted for at least an hour and a half, not more. It’s pretty backwards, and though this is one of my favorite producers, when put up against the Ducru it’s just not as good. Don’t get me wrong, the wine is very tasty, it is not, however my first choice among those that I tasted (that distinction goes to the Haut-Bailly).


And now my notes from the 1959 Lafite Rothschild, considered the greatest 20th century Lafite:

1959 Lafite Rothschild St. Julien, Premier Grand Cru Classe
Drunk 2 times, once at a home-cooked meal in (8-8-2009), once in that epic dinner in (June 2009).
Both bottles had B+ labels, though with obvious signs of aging. in was a little crumbly, cork was perfect. Consistent notes.
Both tastings were in time of great merriment and celebration, as all great wine should be. The color of the wine both out of the bottle and in decanter was translucent red with rusty edges. Perfect for the age. The nose reeks of mesquite smoke and wood fire; that same smell you get in during October. It also has the unmistakable nose of lead pencil, a Lafite trademark. The nose, while a bit straightforward, is remarkable in its clarity and strength. However surprisingly, especially for a 50 year old wine, the nose is a bit hot and alcoholic; uncharacteristic for such an aged juice. The flavor is almost symphonic. It mutates, fluctuates, crescendos, and decrescendos all in one sip. Don’t mistake this as being muddled or unbalanced, however. While drinking this wine I’m reminded of the great scene from the movie Amadeus where Salieri describes one of Mozart’s sonatas, “The beginning simple, almost comic. Just a pulse – bassoons and basset horns – like a rusty squeezebox. Then suddenly – high above it – an oboe, a single note, hanging there, unwavering, ‘till a clarinet took over and sweetened it into a phrase of such delight!” To me, this is the perfect way to describe this wine. The finish has a distinct hint of cherries.
I wish I could think of another way to rate wine other than a point system. As you can see, I love this wine; I think it’s beautiful. However, it is just not on the same level as the ’47 Cheval Blanc or the ’61 Haut Brion.
99 points, an all-time great wine.
Coming next post: Right Bank rundown, even more alliteration, my ceaseless confusion on how no one else realizes that CBS has one show and 117 different names and casts for it.
Until next time, live life well
Zatara
Follow me on twitter!! @zatara_eads

Many Unhappy Returns: The Dark Art of Sending Wine Back At A Restaurant