Do Anecdotes Count If I Wasn't There? 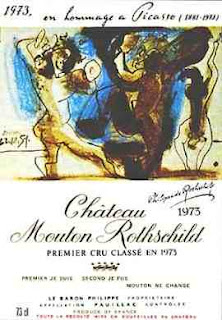 The wine community today is almost like how one would imagine early the 1800’s nautical community. How you ask? Don’t worry, I’ll feed you, baby birds. To me, I think of that 1800’s nautical community like a scene out of ‘Treasure Island’, everyone swapping stories of long ago and far away that somebody else told them in a similar dive, and all of those stories are a little exaggerated and the audience is a little drunk. In the wine community, like that seafaring community, there are tons of tales floating around and everyone knows a rendition that’s just a little different than yours. There are a couple of stories that I think are really cool and I want to share with you, releasing them from the snobby oenophile crowd. Of course the details are probably a little exaggerated, and hopefully the audience is a little drunk.

The first tale originates with the 1855 classification. The classified first growths were designated Chateau Lafite-Rothschild, Chateau Latour, Chateau Haut-Brion, and Chateau Margaux. Eagle-eyed readers may be saying, “wait a tic, there are 5 first growths, not 4. You’re dumb and I don’t want to continue reading this dreg,” but in fact the fifth first growth, Chateau Mouton Rothschild, was added to the first growths in 1973; by the way, Chateau Mouton Rothschild is the only wine to change its classification since that original 1855 classification. There were rumblings among some of the other first growths when the ranking first came out, particularly Lafite, kissing cousin of the Mouton family and its terroir. They vocalized that Mouton should have been a first growth to begin with. Conspiracy theorists deduced that since Mouton had been inherited by the British side of the Rothschild family and was no longer in French hands, that the French government snubbed them ever so slightly; just a wee-little, tiny ‘eff you’. I myself am an unabashed card-carrying francophile, but this is totally something I could see them doing

In 1922, when Baron Philippe de Rothschild came to take over family’s property, it was in disarray. The eccentric Baron (who also enjoyed racing cars and poetry) was an extraordinary publicist. He decided to put his wine on it’s proper pedestal: Premier Grand Cru Classe. He began by printing the phrase, “Premier ne puis, second ne daigne, Mouton suis,” which (roughly) translates to, “I cannot be first, I will not be second, I am Mouton,” on every bottle. A bit ballsy if you ask me, but effective at generating a buzz. Included in his 51 year PR campaign, was his now famous method of creating labels. Every vintage from 1945 on has had a label with artwork created specifically for Mouton and that vintage. After ceaselessly making uncompromising wine of the highest quality and using his own celebrity, Baron Philippe saw his Chateau Mouton Rothschild elevated to first growth in 1973.  In response, the ever charismatic Baron began printing, “Premier je suis, Second je fus, Mouton ne change,” on the label. The motto was now altered to say, “First I am, Second I was, Mouton changes not.”

In continued defiance, pride, or a combination of both, the Baron rode off in the sunset victorious over the notoriously immobile French government. And that perseverance, bravado, and straight up awesomeness, is what really endears him and his wine to us to this day.

Coming next week: another story from wine country, another wine review…I’m thinking something accessible, affordable, and fitting of the season, my continued contemplation of whether or not anyone would take Freud seriously if he had written in pirate talk…

Until next time, me hearties, live life well,

A New Era of Wine Elitism at WSJ?