Austin Hope – The guy who will lasso the moon 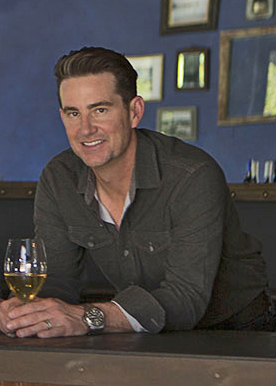 On a quiet Sunday afternoon at the Lonesome Dove in downtown Austin, I was offer the rare opportunity to meet a man who will put the world on fire and is not afraid to do it.

I could not wait to meet a man who was very successful of putting his family’s multiple brands of wine on the map but also was able to switch gears to create a 100% Rye Whiskey.  Two polarized productions that are not commonly under one house.  Yes, many wine makers may make a grape brandy, but to go rye whiskey was thinking outside the bottle.  I was prepared to meet the old man who was set in his ways and was going to direct the conversation of canned answers and being very impressed with himself.   Honestly, I was waiting for my father to walk in sporting one of many ascots.

As we sat at the bar and my Don consumed the wild board ribs and I the dirty rice balls, I learned of wine maker whose drive was to produce a wine available to all while appealing to different generational markets.   I was delighted to meet Austin Hope of Hope Family Wineries and High Spire Whiskey.  A guy who is very confident in his craft, happy to be around and wanting to bring his art to the next level.   His beginning was not unlike so many, family moved to Paso Robles in the late 70s to farm apples and grapes.  Hope as a teen practiced gumption to buy his first motorbike by selling mistletoe and sheep – one of the first signs that he is a go getter and cannot sit still.   As the apple orchards faded into the sunset, their cabernet production increased and sold to the Liberty School label.  The Hope family upped their game and purchased the label to make it fully their own.   This was the beginning of several labels under the Hope Family name.

Hope gives thanks to wine makers he has interned under along the way and helped gain the hands on experience that has rounded his education at Cal Poly, San Luis Obispo.   He calls out Chuck Wagner of Caymus, Napa and Chris Phelps who he assisted at Hope Family in creating a second brand of Treana.  Austin Hope is not afraid to get his hands dirty and is not the golf shirt executive on the sidelines monitoring the debts and credits. 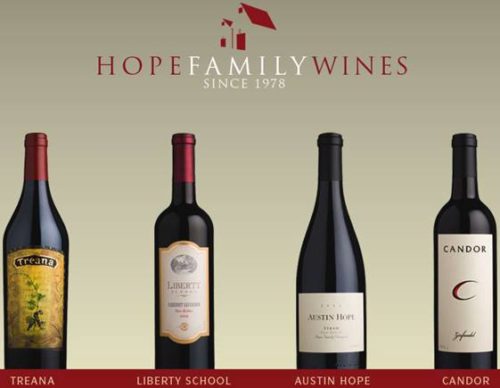 As we sat at the bar, the head winemaker for Hope Family took to opening several brands that he created to share with us.  We commenced the afternoon with a Rosé collaborated out of a great friendship with restaurateur Tim Love.  The Love Hope Rosé is crisp clean wine that is not your grandmother’s overly sweet flowery stuff that was put on the table for Sunday dinner. The first note is the creative, a bit off the wall label that leads you to enjoy a bright flavors of citrus, berry and papaya made from the blend of Syrah, Grenache and Mourvedre.   The two express their passion right on the label about making a bad ass rosé.  I knew right then that I was not talking to the typical stuffy winemaker but more like the cool rock star.

We continued with the first Hope Family Liberty School Cabernet, one of three labels under this brand that includes a Pinot Noir and Chardonnay.  The Cabernet is delightful and smooth with hints of berry and vanilla.  Happily not present was over the top pepper that tends to overtake the palate.  This is perfect for any meal and priced so that it should be a staple in everyone’s wine rack.

The Treana Brand has several white and red labels.  We enjoyed the blended red that was comprised of 75% Cabernet and 25% Sauvignon that brought earthy tones of clove, current and chocolate to the glass.  It was delight to drink on its own. 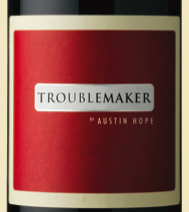 The last wine we tasted was Troublemaker – I loved the name and immediately thought of the twenty some old kid returning home for a holiday dinner.   The name got his attention yet the taste and palatability got his parents. This is a wonderful blend of Syrah, Zinfandel, Grenache, Mourvedre and Petite Syrah.   This was rightly ranked the #1 blend in the country.

Our conversation moved to Austin Hope’s other enterprise of High Spire Whiskey – a 100% Rye Whiskey.   As many Californians move across the country to set up home in affordable places, and personally speaking are not always welcomed.  Hope is the gutsy Californian who opened up production in KENTUCKY along-side of generations of local family spirit producers.  Hope does not follow the local trend of bourbon, but instead opens the door for the lost art of Rye.  Rye was the principle spirit lost in prohibition.   He resurrected Highspire label that was born in Pennsylvania by Irish immigrant Robert Wilson about 1823.  For many whiskey drinkers you are looking for the burn at the finish to rank it.   As one who has enjoyed the strong bourbons such as Maker’s Mark and non-apologetic jagged dance of Laphroaig scotch, Hope’s rye is drinkable immediately without having to warm up to it.  The true beauty of it is that you can follow the whiskey protocol of savoring and experiencing it — straight. 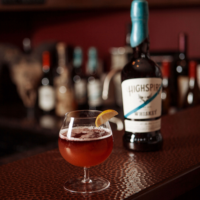 I normally enjoy whiskey or scotch with the Japanese method of a two ounce pour, two ice cubes and wait two minutes.  It has never failed me but I can leave the practice on the shelf with Highspire.   Hope uses Ryman, a fair winter rye to create the mash with cool water.  Short term cooperage is in the barrels from the Hope Family winery and long term locally made oak barrels.   I truly enjoyed it and now have it in our whiskey/scotch collection.

Austin Hope is confirmed a wine maker who has multiple brands with several varietals and is now firmly planted in whiskey production.   His brands are in all 50 states, 6 countries and counting.   He is unstoppable and Austin Hope will be a leader in whatever he takes on.  He is not afraid of taking on a new challenge including his 2 year Rye whiskey that is awaiting release.   I cannot wait to find out what else he has up his sleeve.

Austin Hope has the guts to lasso moon and when he does I cannot wait to say I met the guy.   A down to earth guy who is comfortable sharing a few of his wines and rye at the Lonesome Dove bar on a grey afternoon while taking on new adventures to further his reach in his craft.

The 2017 Wine Lover’s Guide to a Kitchen Remodel