A Trip to Mendoza…Put It On Your Bucket List! (Day One) 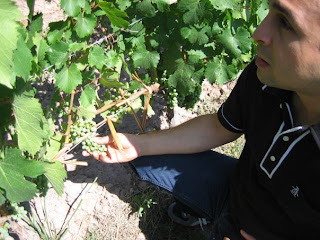 Nestled between the Atlantic and Pacific Ocean, in South America is a land of majestic views, fertile soils, beef parillas, and the mighty Andes Mountains. Argentina is a land of mostly expatriots, immigrants and refugees who came to Argentina one or two generations ago to seek out a new life. Upon arriving in Buenos Aires you’ll quickly get the feeling that you’re in some rural European country. The two most common words in Argentina are “Claro” which translates to “perhaps” and “passion” which has the similar English translation. The difference is that words are almost sung from the tongue. Argentine folks are very passionate and they all will eagerly reveal ancestry which in large part comes from Italy, France, and Spain.

As one would expect, the grape never falls far from the vine. Grandfathers and great uncles migrated to Mendoza from Europe and brought their wine making skills with them. Planting vines in fertile soils at different elevations in close proximity to the Andes Mountains, you can see the snow caps in the summertime. Cool coastal breezes shoot over the Andes Mountains from Chile, coupled with the elevation, water flow from the Andes and volcanic soil produce the perfect conditions for grapes such as malbec, bonarda, syrah, torrontes, and cabernet. Wine is produced with great pride in Mendoza and the results are astounding. Recent figures point to 1200 bodegas (or wineries) however my sources on the ground indicate closer to 1500. There are three main regions (sub appellations) in Mendoza: Lujan de Cujo, Maipu and Valle de Cuyo. There are other regions outside of Mendoza (but within driving distance or bus) that are particularly famous including Salta which produces the best Torrontes in the world and home of the famous Colomé, producer of the 2007 Estate Malbec that won Wine Spectator’s Top 100. Another up and comer is the Patagonia region, the southern most tip of Argentina just across the way from Antartica which is starting to produce some excellent Sauvignon Blanc. Back to Mendoza…

We visited six bodegas in Mendoza in two days with an experienced taxi driver and wine enthusias(t which can be rented for $80 per day). Day one began with my favorite “cult” producer in Lujan de Cuyo, Achaval Ferrer. Four guys and a talented team, lead by Italian winemaker Roberto Cipresso, produce only 12,000-15,000 cases of wine. Their secret lies in the blending components and the way they control the temperature of their wines during the fermentation process. Their tanks are placed inside concrete cylinders and reinforced to provide consistent temperatures. Their baseline Mendoza Malbec delivers scents of white flowers, with a lush molassis texture and full fruit body. Their Bella Vista Vineyard located in front of the winery is their higher end selection displaying a concentration of dark cherry, plum, tobacco with soft velvet tannins and clean soft finish. Truely magnificent, with excellent cellar capacity of 10-15 years. Next stop…Pulenta Estate in Lujan de Cujo.

Pulenta Estate is another small producer from a winemaking family of Italian origin. Vines were brought in from Italy and France and they produce the best Cabernet Franc I have tasted in 10 years. We tasted several wines, all excellent quality, but three stood left a memrable impression that I cannot forget. The Gran Corte 2006 is a blend of 5% Malbec, 34% Cabernet Sauvignon, 15% Merlot, 3% Tannat, and 3% Petit Verdot aged in French oak. This wine is concentrated, extracted fruit delivered with soft warm tannins where you’ll find cherry, plum, raspberry integrated with spice. Again for the price of about $30 US, its very well could kill any younger blend tasting event. Second up was the ’07 Malbec, easy with nuances of french oak, vanilla, jammy texture, but not overly-so. Taste white pepper and fennel with cherry and plum. To be consumed with a tenderloin medallion in a malbec reduction sauce ($19-25 retail). The final wine tasted here blew me away. Its not easy to find a delicious Cabernet Franc, which is typically used as a blending grape for Bordeaux varietals. This producer mastered the art of Cab Franc with the ’07 Estate Cab Franc. Absolutely delicious, no over oak, no bitter aftertaste, just give her about 5-10 minutes to breathe and suck down slowly. Bouquet of eucalyptus and spice. Taste the Pepper and jerky delivered ultra smooth with some vanilla velvet tannins. When Andrea asked me to score this wine I told her I’d give it a 96-98 and she laughed. “You guessed dead on with Robert Parker who gave it a 96, and for that I will give you the last bottle.” Talk about reward!

Last visit of the day went to Bodegas Septima (again in Lujan de Cujo), where we ate lunch (yes…lunch!). This winery will remind you of a well-fortified castle in Europe. I would rather be no where else in the event of a battle than this winery. Giant limestone walls insulate the winery which produces a substantial volume of wine from their 475 acres. Production includes syrah, sauvignon blanc, cabernet and malbec. The family is of Spanish origin with over 600 years of lineage in the wine business. Their style of wine is more approachable and soft, which would cater to the export market. Their 07 Malbec was soft and immediately drinkable. Taste dark cherry, raspberry, plum and a hint of fig. Price to quality, it is exceptional value at around $12-15 per bottle. This wine has beef written all over it. Next up was their 06 Syrah, which had all the characteristics of a crowd pleaser. Soft, fruity, jammy with raspberry, plum, pomegranate in concentration and a soft finish. This wine was tasted with a variety of soft medium strong cheeses. The lunch finished with a Grand Reserva blend of Malbec, Cabernet, Tannat. I instructed the guide to just leave us the bottle. Blended in both American and French Oak, you’ll find plum, raspberry, fig with some old-world leathery spice and a mighty finish. No doubt it could have used a decanter, but time in the glass gave it incredible character and a revealing grip.
The evening of day one was finalized in Mendoza city at Azafran where you’ll find Fernando Szczurowski, a young aspiring winemaker/sommalier who will guide you into a very cool stonewalled wine room. There you’ll find some very hard-to-find or obscure productions to accompany your delicious meal (try the lamb, trust me). The wine selection of the evening fell to a pretentious production called “Caro” which translates to expensive. Caro is a blend of Malbec and Cabernet from Barons de Rothschild (France) and Nicolas Catena, arguably the most prolific wine producer. The wine had some old world characteristics with spice and leather on the mid palate and of course the delivery was Argentine malbec displaying a warm fruit body in classic format ($49-60).
Stay tuned for day two, as I reveal some of the most interesting vineyards and wines of the trip. Until then, I’ve taken the liberty t
o share a few Argentine wines that I feel everyone should try, available here at Wines.com and most likely at a retailer near you…

2007 Alamos Torrontes, taste the grapefruit and citrus in a refreshing ensemble of succulent melon and tangerine. A party favorite white wine to accentuate cheeses and fruit platters!

Malbec Madness Six Pack, few people like to buy a case of one one. This package gives you what we feel is the best of Argentina. If you like variety and Malbec, or if you are looking for a special wine gift, this is the one to give.

Check back later this week for Day 2 of Argentina where we visit some ultra boutique wineries!Happy 2010 and we wish you all health, happiness and good fortune. – Alex Andrawes, CEO

The First Day of the Rest of Your Life